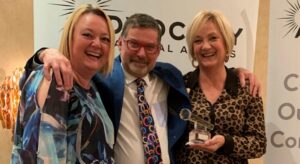 Patricia Winchester, Chief Executive of charity My Voice Jersey, won the Outstanding Advocate Award in the National Advocacy Awards held at the NEC in Birmingham for 2019-2020.

Patricia, who was also shortlisted for the same award in 2018 said: “I’m absolutely thrilled to win this award. My role is to support individuals to understand and access their rights at a time when they are at their most unwell. But it has also been about challenging services, changing the law and introducing codes of practice. Jersey has now been recognised on a national stage as being at the forefront of advocacy across the UK.”

My Voice Jersey is an independent advocacy charity, which works with adults and children who are severely affected by mental illness or who lack capacity. The organisation offers a range of support such as ensuring the legal and human rights of islanders are respected, as well as making sure those affected feel listened to, that their views and wishes are fully considered, and that they are able to participate as far as possible in decision-making about their care or treatment.

Wendy Kinnard, chairwoman of My Voice Jersey, said: “I am thrilled Patricia has received the recognition she so deserves. The award of National Outstanding Advocate celebrates individuals whose work has directly led to significant improvements or change for people. Patricia has helped to raise standards in a number of areas.

“She campaigned to bring our mental health and capacity laws up to date, for improvements in the Mental Health Tribunal and promoted the human rights of patients and others in the community facing severe mental difficulties. Patricia continues to show extraordinary commitment, tenacity and passion for advocacy and the difference it can make. We are fortunate to have someone of her calibre working on behalf of some of our most vulnerable individuals in our island.”

Sir Michael Birt, patron of My Voice, said “I am absolutely delighted at this award to Patricia. It is fitting recognition at national level of her vital role in establishing and developing My Voice and in protecting the interests of those in the Island with mental health issues. Many have benefitted from her wise and sensitive advice and assistance. It is an extremely well-deserved award.”

Health Minister Deputy Richard Renouf said: “I congratulate Patricia on winning this award, which recognises her skills as well as her professionalism and dedication to My Voice. We can be confident that the services offered to vulnerable islanders who look to the charity for support are of the highest standard.”